The light art is a very popular trend in art festival circuits with famous examples like works by Dan Flavin and James Turrell. There is something about light in the dark that speaks to the ancient part of our consciousness something that makes us wonder and fills us with giddy excitement. The Toronto Light Festival in the Distillery district is a good event to experience this sort of ancient excitement. 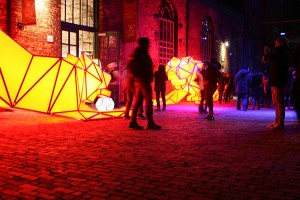 The experience of being out on a snowy night with a lot of excited and slightly cold people looking at the different light installations and busily going from one attraction to another is quite a novel one, in the best traditions of 19th century Europe’s (France in particular) voyeurs. The similarity not only extends to general cultural excitement and night life attractions but also to the commercialisation of this event. 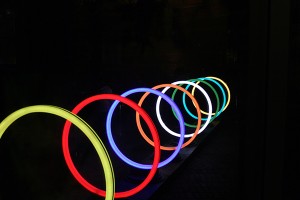 The truth is that this festival is very consumer-centric and it encourages people to spend some money in the Distillery district in the different cafes and shops surrounding the light festival. So the fact that the festival is a sort of a marketing ploy is really hard to ignore. Speaking of art pieces, as with any other light installations it is better to witness them live than read about them from a shot blurb. 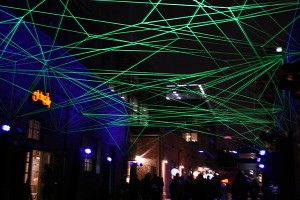 It is mostly about general experience than about specific art pieces, which most of them are really interesting if you could push past the mercantile aura that cloaks them like a veil. On another hand, the consumeristic aura of the event could be interpreted as part of the art experience. In the night with the snow enhancing the beauty of the light and with the cold that forces people to get into cafes, stores and galleries that surround these festivities. It adds to the sense of celebration of dark and light, it becomes more about the human experience of togetherness than just pragmatic desire of local businesses to get your attention. You can still enjoy this festival until March which I wholeheartedly encourage you to do.

Bato Bazarov is a person who is lost in his mind filled with dreams about art, illustration, film, and other less interesting topics. Sometimes he tries to make some of his dreams a reality. As an artist Bato works predominantly in the medium of illustration, but includes painting, video and installations. He has had group shows in Toronto at The Arts and Letters Club, Gladstone Hotel, The Rodman Hall gallery in Saint-Catharines as well as the University of The West Indies St. Augustine in Trinidad W.I. Bato graduated with honors from Brock University with BFA in Studio Art.